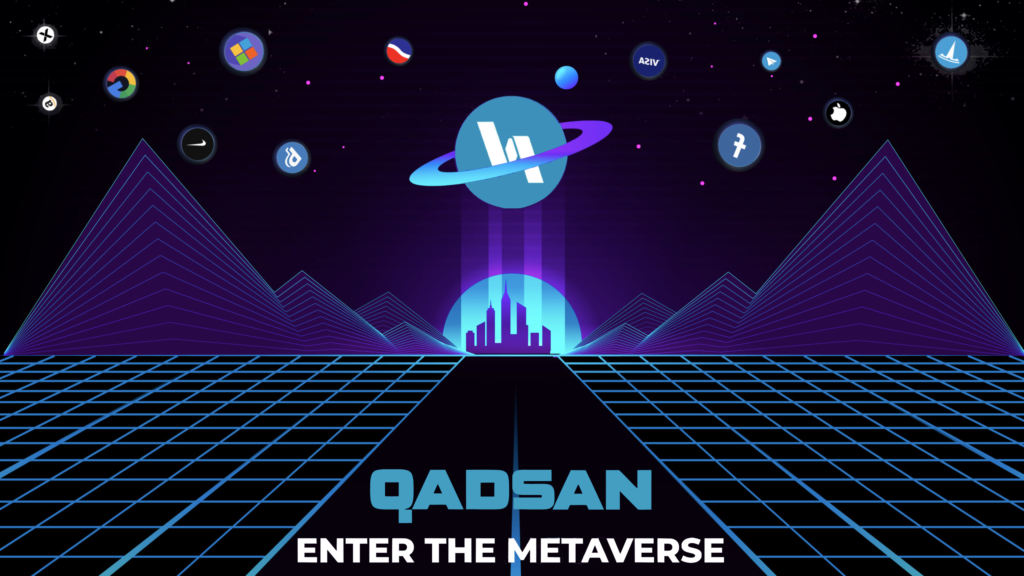 Metaverse, a term first coined in science fiction, is a combination of the prefix “meta”, meaning beyond, and “universe”.

It refers to shared virtual worlds where land, buildings and even entire companies can be bought and sold, often using cryptocurrency and NFT tokens.

At first sight it might appear that in contrast with a real stock exchange with its real stocks of real companies, QADSAN, the token-share market game with its unreal virtual token-shares of virtual companies, represents something that is not serious and deserves no due attention as an object of possible investments.

However, that is a far from being the case.

Of course, on the one hand QADSAN is just a game. But on the other hand, isn’t an ordinary exchange essentially just a game too? In addition, in contrast with QADSAN, one without any real rules or guarantees whatsoever?

Yes, naturally, these rules and guarantees are in fact in place theoretically, no question about it. But in reality they often turn out to be so complicated and incoherent, dependent on such a large number of very diverse and often totally unpredictable factors, such as the political situation in the world, the situation on the world share markets, the state of affairs in the particular area of business of the company whose shares you have acquired, the situation within the company itself, and so on and so forth that it practically becomes entirely hopeless for the ordinary investor. In reality it turns out to be absolutely impossible for a non-professional to figure out these factors and try and take into account something at least.

On one beautiful day you simply lose all your money suddenly, and then it is explained to you in a qualified and professional way how and why it happened. This much about the “rules”.

– And what about the “guarantees” ?– you may want to ask.

– But have you been cheated in the process? Was everything done honestly?

That’s what our “guarantees” were all about. But the fact that you were unlucky is not our problem!

– So I might have been cheated after all! I wonder how once I have lost everything anyway.

It is familiar, isn’t it? In any case, there is no need to go on, since the present crisishases already clearly demonstrated to all the genuine value of exchange “rules” and “guarantees”. And simultaneously that of the stability of the entire world financial market.

Nothing like this exists or is possible in the QADSAN Metaverse, since its virtual environment is in no way dependent on political or global financial turmoil.

Let the real world be bothered with crises of all kinds!

In the QADSAN Metaverse – in its virtual world of virtual companies – everything is always stable and calm.

There are no disasters, no catastrophies here. Virtual companies doing virtual business can never go bankrupt. Their virtual managers can never get involved in any kind of financial scandals. They can be fully trusted.

QADSAN Metaverse is a real island of financial stability in our unstable world.

That’s because like at any exchange, the situation at QADSAN is fully determined by the balance of the buying and selling of its virtual token-shares. But with real shares this balance constantly and chaotically fluctuates. That’s because the real stock exchange is an inseparable part of the entire world financial system and is consequently extremely sensitive to any events, even those quite unexpected and seemingly distant from the world of business. And this is what makes its operation almost totally unpredictable.

The metaverse, on the other hand, is completely independent of the real world. In the world of QADSAN virtual companies there are no extraordinary events, so once formed, the balance of purchases and sales in QADSAN will remain unchanged for any period of time.

QADSAN’s near-term plans include the use of Augmented and Virtual Reality (AR/VR) technologies that will allow users to fully interact with each other in space, such as holding meetings of token-share holders to elect the governing bodies of virtual companies, including its president, determining dividend policy and other important issues.

It is also planned to create a virtual Financial Reserve System (FRS) and independent banks created by the game participants themselves to conduct credit and investment deals with virtual companies and its participants.

In this way, participants will be able to buy token-shares with borrowed funds to make short sales or in anticipation of an increase in their value. Virtual companies will also be able to use bank loans to buy back their token-shares and for mergers or acquisitions of other companies.

The curse of any financial system is panic. But there can be no panic at QADSAN, since one day of business is in no way different from the other. So if there was no panic yesterday, it can’t happen tomorrow. Because how is “QADSAN yesterday” different from “QADSAN tomorrow?”

The QADSAN market game is in fact the only example of its kind in terms of being a totally stable financial system. It’s fully protected from any outside interference and is practically unaffected by it, since the virtual game format deliberately chosen by her inventors has made it possible to isolate it fully from the outside world and make it virtually autonomous.

Therefore, the security of QADSAN players can today be considered virtually total.

Are you a player of QADSAN? Yes? Not yet? In any case